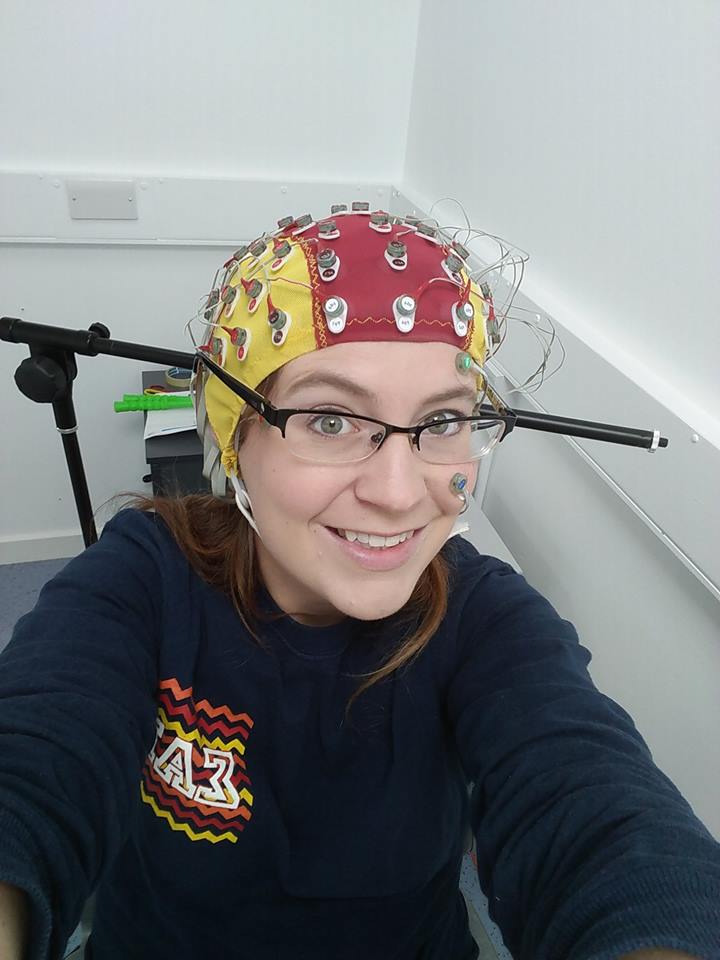 A brief selection of my research projects

Music Cognition
As a member of the Sensorimotor Neuroscience lab at UC Merced, I have researched how the brain processes rhythm -- the regular organization of events in time -- when we listen to music. The perception of musical rhythm relies on the interaction of motor, parietal, and auditory regions of the brain within a pathway called the dorsal auditory stream. This pathway enables predictions from the motor cortex to travel via the parietal cortex and inform auditory regions where in time the next musical beat will land, according to the Action Prediction for Auditory Simulation (ASAP) hypothesis (Patel & Iversen, 2014). Using non-invasive transcranial magnetic stimulation (TMS), I have temporarily down-regulated neural activity in this pathway to probe the causal role of the motor system in musical beat perception. Specifically, we have replicated that interfering with the parietal cortex impairs some aspects of beat-based musical timing perception, but these effects may be lateralized to the left hemisphere (Ross, Proksch, Iversen & Balasubramaniam, in review).

In my publication "Motor and Predictive Processes in Auditory Beat and Rhythm Perception," I have argued that cortical networks proposed by the ASAP hypothesis, in conjunction with subcortical networks proposed by the Gradual Audiomotor Evolution hypothesis (Merchant & Honing, 2014), provide a converging and more complete description of the role of the motor system in musical timing perception (Proksch, Comstock, Médé, Pabst, & Balasubramaniam, 2020). Additionally, these hypotheses can be integrated under the Active Inference framework of sensory processing, which posits that action and sensation are not two separable processes, but rather that the brain+body system actively solicits internal predictive models of incoming sensory stimuli in an ongoing process of prediction error minimization (Adams, Shipp & Friston, 2013).

Bridging the divide between my work on music cognition and my work on interpersonal coordination, I have collaborated with an interdisciplinary team of international scholars to characterize the "Multilevel Rhythms in Multimodal Communication" (Pouw, Proksch, et al, 2021). In this publication, we review how multiple levels of communication, from neural, bodily, and social interactions -- each which their own multimodal signals-- contributes to to the complex rhythms of human and non-human animal communication.
​
Refs:
Intelligent Adaptive Systems - Interpersonal Coordination
In temporal rhythmic processing, the interaction of the body, brain, and environment result in an emergent phenomenon of sensorimotor and neural entrainment (Ross and Balasubramaniam, 2014). This emergent phenomenon is extended over multiple bodies and brains when the movement dynamics of one individual becomes causally coupled  with the movement dynamics of another (or multiple) individual(s), forming an interpersonal synergy through their mutual interaction (Riley, Richardson,  Shockley, and Ramenzoni 2011). Measurement of interpersonal synergy can be indicative of shared social cognition: of joint participation in co-regulating multiple patterns of activity between two or more agents engaged in a social interaction(De Jaegher, Di Paolo, Gallagher, 2010). Ideally, in the controlled setting of a lab, we can measure when an interpersonal synergy develops by correlating individual signals recorded from each individual within a group social interaction, e.g. electrodermal activity, movement dynamics, speech signals, or even neural activity. However, individual measurements such as these may not always be available or easy to obtain in very large, naturalistic social interactions. In my role as a National Science Foundation Research Trainee on Intelligent Adaptive Systems, I have applied tools from dynamical systems theory to evaluate the coordination dynamics of large, multi-agent groups of people. I have shown that  Recurrence Quantification Analysis (RQA), when applied to only a single aggregate measurement, can reveal coordination patterns that differ during independent behavior, and after the formation of a single complex system during interdependent interaction (Proksch, Reeves, Spivey and Balasubramaniam, 2022). Moreover, conceptualizing interacting groups of humans as engaged in collective synergies helps to shed light on interpersonal behavioral dynamics as "emerging from groups of agents who are embodied and enactive, as well as embedded in an environment, thus making their cognition extended across many interacting elements" co-creating a shared acoustic social world (Proksch, Reeves, Spivey and Balasubramaniam, forthcoming).
​
Refs:
Interoceptive Inference and Emotion
How and what emotional content is communicated or evoked by music constitutes a central question for music cognition.  An explanation of the physical processes underlying music-related emotion must appeal to more than extramusical associations and violation of musical features in the external auditory signal. A thorough account of music-related emotion must also take into account the physiological processes involved in the affective experience of the listener/performer. In my publication, "Interoceptive Inference and Emotion in Music" (2017), I have proposed that an integration of the computational framework of predictive processing, paired with the neurofunctional mechanism offered by the QTE, provides a more nuanced explanation of emotional experience than either framework/theory offers alone—a claim which I justify through an explanation of how PP and QTE, together, enhance our understanding of music-related emotional experience, shedding light on the answer to the question of how and what emotional content is communicated or evoked by music.
​
Refs:

Sometimes I talk about my work on social media